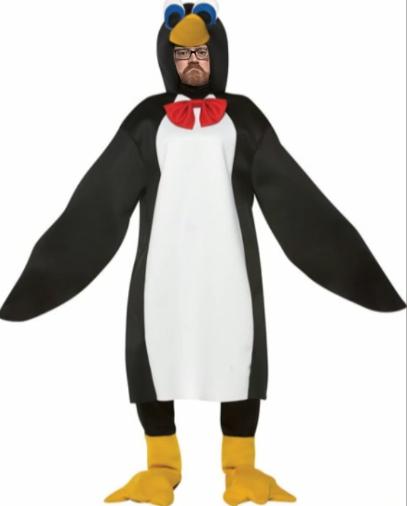 Pengwill is the result of a bet between Will Smith and Norman Chan to see who could build the tallest, strongest spaghetti-marshmellow tower.

Will lost this bet on the May 14th, 20011 Happy Hour when his triangular tower was unable to support even one comic book without collapsing. Norm's tower, based on the Chinese Bird's Nest Stadium , supported upwards of four comic books.

For losing the bet, Will had to wear a Penguin suit in three Whiskey Media videos. Pengwill can be seen in a MakerBot , a Happy Hour (available to Whiskey Media Members only), and Thursday Night Throwdown.

Matt Kessler, Whiskey Media intern has also worn the penguin suit on the 6/10/11 Happy Hour. With most of the staff out of the office due, the Happy Hour was just Will and Ethan discussing the site. Various people made cameo appearences seen in the window behind Will. At one point Kessler appeared dressed in the suit. Will proclaimed that he would never wear the suit again after that.

1 of 2
Add photo
Retrieved from "https://tested.fandom.com/wiki/Pengwill?oldid=4303"
Community content is available under CC-BY-SA unless otherwise noted.